Bokor is haunted, its misty colonial buildings close to the clouds in southern Cambodia. Built in the early 20th century, it was a fashionable retreat from sweltering summers for the Cambodian and French elite.

During this visit, only ruins remained of these extravagant structures that include a once-famous casino and holiday homes. These stately houses were abandoned on the windy peaks of a national park. They bore the marks of Khmer Rouge and Vietnamese conflicts from a generation ago, and the contemporary graffiti of a few hardy visitors from Cambodia and beyond.

Now, though part of a national park, the buildings have been purchased by a Chinese conglomerate, and it is rumored some will be turned into casinos once again.

Blueprints on 100% cotton A3 size Lanaquarelle paper, chosen for its French colonial references. 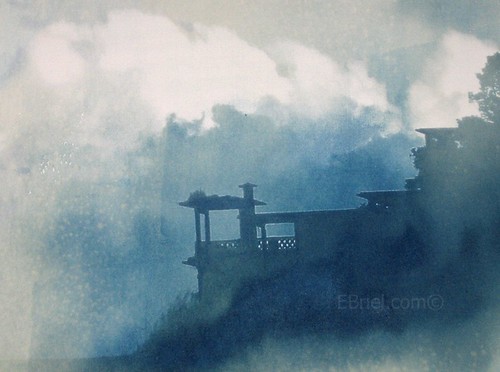