"APEC Blue" is the name Beijingers gave the city's brilliant skies for a week in winter 2014. Ten thousand factories had been closed, and millions of cars banned before and during the APEC conference. The city shut down as world leaders – including President Obama – converged on China's capital. Roads were peaceful, the air was fresh, and we were chilled as coal-fired heating was turned off to ensure skies remained clear. 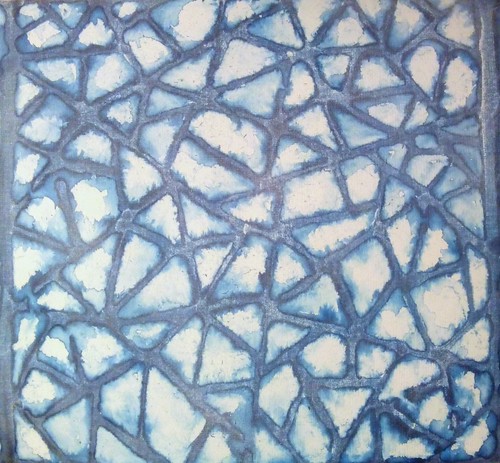 Beneath a thin layer of gesso are printed texts in English and Chinese, from articles on Beijing's 'airpocalypse' incidents (when hazardous pollution rises to levels beyond index) and the Chinese government's threats to the US Embassy after they broadcast real pollution levels.

If you're in the Los Angeles area, you're welcome to view the artwork at bG Gallery's Spectrum Gestalt show. It opens tomorrow 18th June, 5-8pm.

You're welcome to meet me there.